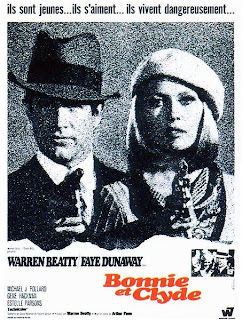 In terms of the New Hollywood, Bonnie and Clyde and Easy Rider remain the two seminal films that slowly led to the rise of filmmakers such as Martin Scorsese, Francis Ford Coppola and William Friedkin. Both Bonnie and Clyde and Easy Rider were directed by filmmakers who wanted to make cinema more controversial and gratuitous in its use of violence, sex and drugs. Whilst Dennis Hopper directed a film about two lone bike-riders travelling across America to take part in a drug-fuelled binge at Mardi Gras, Arthur Penn directed a violent, gangster film with lead protagonist's that were cold-hearted murderers with their only intention to rob banks and keep on running from the cops. Killing as many cops in the process. These films were hugely successful and they ensured that producers gave more freedom to filmmakers. This led to The Deer Hunter and The Godfather, films that through their financial success, led to producers wholly trusting the directors. Catastrophes such as Heaven's Gate destroyed United Artists studio whilst Apocalypse Now became an infamous production that wasted millions of pounds and seemed to be 'in production' for an unnecessary and unplanned amount of time. Bonnie and Clyde, pre-dating Easy Rider, began this movement and today still stands as one of the most important films in American cinema. 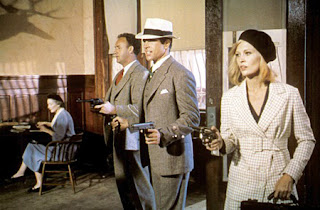 Based on a True Story

Though we see two characters who existed, this is not an accurate account of the Barrow Gang. In the first instance, CW Moss (Michael J. Pollard) is a composite of two people - WD Jones and Henry Methin. Both Bonnie Parker and Clyde Barrow, in reality, had been arrested and placed in jail many times during the course of their criminal run. The two people did not send photo's and their writing to the press to gain notoriety - these were items which were found and published by the police. In fact, the poem read in the final act of the film was only published in the press after Bonnie's Mum agreed to the publication after Bonnie and Clydes death. As a final example, the shoot-out at the end of the film depicting Bonnie and Clyde, shot-down, just as they were about to go 'straight' could not be farther from the truth. In reality, Bonnie and Clyde had in the back the car "over a dozen guns and several thousand rounds of ammo". There are so many deviations from the reality of Bonnie and Clyde, that it is a much better idea to simply see this as another interpretation of bank-robbers on the run. 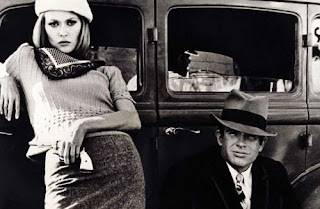 From the very first meeting between Bonnie (Faye Dunaway) and Clyde (Warren Beatty), we see a strange anti-climactic nature to their relationship. The first sequence shows Bonnie, naked, in her house. Her feminity and sexuality is clear - and yet, following the first robbery, the two fail to consumate their relationship. Indeed, Bonnie tries very hard to seduce Clyde but he pushes her away claiming he "ain't no lover boy". In reality, Clyde Barrow's first killing was in prison, whereby the victim sexually assualted him repeatedly before Barrow killed him with a length of pipe. In the film, it is clear that the gun - which Bonnie caresses gently in a sexual manner - clearly represents Clydes masculinity. He is depicted as impotent; it is this weapon that defines who he is.

Bonnie, on the other hand, seeks more solace and regularly attempts to whisk Clyde away so the two can be alone. When Buck (Gene Hackman) and his wife join the gang, you can see that Bonnie finds the company claustrophobic. She insults and despises Blanche (Estelle Parsons) and is angered by the prospect of paying her. It is only in the final act do we see Bonnie and Clyde make love and this seems to be what changes their relationship - they even discuss the future as Bonnie asks Clyde what he would do if they woke up the following morning free with "nobody chasing us". 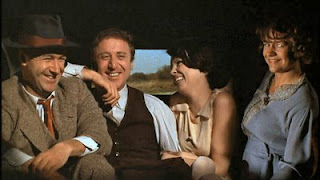 Released in 1969, Butch Cassidy and the Sundance Kid appears to have a very similar theme and story to Bonnie and Clyde. In fact, the opening credits of Bonnie and Clyde, whereby black-and-white pictures flash on screen between each credit, seems to be clearly the inspiration for the use of photographs in Butch Cassidy and the Sundance Kid. In fact, the use of photographs to depict the New York segment of Butch Cassidy and the Sundance Kid, seems like a natural progression from using the pictures in Bonnie and Clyde at the start to quickly show the upbringing of the lead characters. Not to mention how both films portray bank-robbers in rural America and their 'spree', the police chasing them and both finish with a historic death of the two characters. Both of which were shoot-outs.

Dean Tavoularis was hired by producer Arther Penn to be cinematographer on Bonnie and Clyde and this was his first major position that led to his work on The Godfather trilogy and Apocalypse Now. This film depicts wide-open landscapes and dusty roads but it does hint at Tavoularis' Caravaggio-esque shooting during the night scenes. Specifically, when the Barrow gang are found by police at a Motel, the use of sparse lighting from the front-headlights create this classical, baroque atmosphere. The sequence itself must have been a frame of reference for a similar sequence in Michael Mann's Public Enemies. 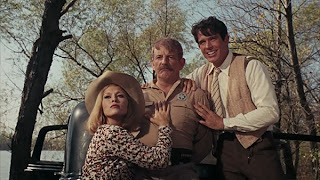 The Past Will Catch Up With You

The mocking and humiliating picture of the Texas Ranger (Frank Hamer) is our connection between two points in the film. The 5-person gang seem to be on a roll and are gaining notoriety across the land. Buck reads a newspaper highlighting comedic stories of mistaken identity. The Texas Ranger, slowly sneaks up on the gang and in a matter of seconds the tables are turned and he is photographed, mocked and laughed at by the gang. It is simply poetic how this is the man that shoots the two down in final scene. In another sequence, the gang pick up a couple - Velma (Evans Evans) and Eugene (Gene Wilder) - and the seven of them seem to be having a great time until Eugene reveals his profession: "I'm an undertaker" he casually mentions.

You cannot outrun your past and you cannot outrun the inevitable death of a carefree and destructive life. Bonnie knows this - as she immediately throws Eugene and Velma out the car upon realising who he really is - Death himself. Even Blanche is aware as she constantly shrieks and fears for her life. It seems our rogue Clyde Barrow is the only one who does not realise that the time is ticking and he cannot turn back time. He has no concept of the short-lived nature of the armed bank-robber.

Clyde answered Bonnie when she asked about his actions if they woke up with "nobody chasin'" them. His answer?

"First off, I wouldn't live in the same state where we pull our jobs. We'd live in another state. We'd stay clean there and then when we'd take a bank, we'd go into the other state..."

The horrific massacre at the end was inevitable - and Bonnie knew it, whilst Clyde did not...

Blogged by simoncolumb Written at 17:47