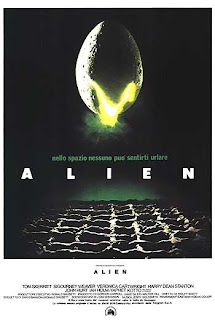 "This is Ripley, last survivor of the Nostromo, signing off"


The LAMBcast recently discussed the Alien Franchise and the conversation clung to two 'views' on the franchise. The one perspective supports Aliens as the stronger film - a stronger arc for Ripley creating her 'alien' family, with more aliens and more guns. The other perspective, which I stand-by, is supporting Alien as the strongest entry in the franchise. Everything that stregthened the franchise began in Alien. Ripley and her relationship with the creatures, crucially began in this film. The designs for the creatures began with H.R. Giger's involvment on this film. Even the world inhabited by all the crews, within a capitalist world, was created and controlled by Weyland-Yutani (featuring in the Viral campaign for Prometheus) began in this film. Like a flower, it blossomed and with each following film, the world expanded and, for better or worse, the franchise as a whole cannot be ignored.
Setting the Stage for the Alien

August 1970. Dan O'Bannon and John Carpenter created a student film - that is packaged and sold on - and named Dark Star. This film, about four astronauts on a spaceship explores lonliness and features an alien killed by a character named Pinback (played by O'Bannon himself). The lack of credit O'Bannon receives on the film prompts him to write his own script ... which sits on the shelf for many years until a little film called Star Wars comes along. 20th Century Fox, owing to the success of Star Wars is keen to release any Sci-Fi alternative, knowing that a huge audience has an appetite for space. Indeed, the Nostromo, throughout the reveal of the city-like surface in the films opening clearly imitates the Death Star. Even before Dark Star, in 1969, the art-house 2001: A Space Odyssey proved that a Sci-Fi film does not have to adhere to the guns-and-goo nature of a B-Movie and so the stars had aligned and Alien had been green-lit.

Features from 2001: A Space Odyssey littered the Alien story - a sinister character in 'MU-TH-UR' and the design of the white-walled interiors of the ship. Though, akin to the rebels in Star Wars, this was not clean and completely well-lit. Maybe the sleeping-chamber had a cleanliness and white-ness that evoked Kubrick, but the truckers-nature and the well-worn clothing of characters such as Parker (Yaphet Kotto) and Brett (Harry Dean Stanton) clearly imitated the rebel Han Solo in the bar on Tatooine.

The script originally depicted a group of men which then changed to include two female characters - Lambert (veronica Cartwright) and Ripley (Sigourney Weaver). The range of characters gave the impression that this was a world whereby your gender and race did not factor into your job - Weaver noted how she "imagined" Ripley had a child and Husband at home, but her glances toward Dallas (Tom Skeritt) gave the impression that a little flirting was not amiss. Only the carefully-dressed Ash (Ian Holm) seemed out-of-place - well-spoken, dressed smartly, his almost-affluent nature could be the threat - and we are clearly not expected to trust him. 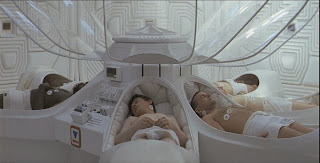 As the franchise progresses, the Alien quartet explores capitalism further, and the subtlety in the first film is not to be ignored. Talk of the difference in pay between employees and, towards the final act, the expendable nature of the crew, clearly depicts a capitalist-economy. Ripley is the one employee, happy to state "negative quarantine" with regard to Kane's (John Hurt) accident outside the ship - but it is Ash who overruns her authority and opens the door. A central-point of Joel Bakan's documentary The Corporation reveals how modern-business practices show a "callous disregard for the feelings of other people, the incapacity to maintain human relationships, reckless disregard for the safety of others, deceitfulness, the incapacity to experience guilt, and the failure to conform to social norms and respect the law.". You could very easily look at Ash, who is representative of Weyland-Yutani's business practices, and apply the same logic. 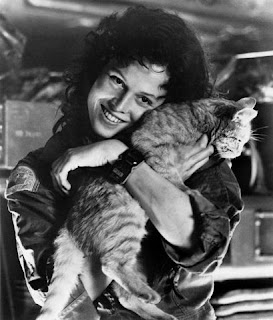 I think the fact that Ripley, originally a role that a male-actor would play, was converted into a female role means that the only analysis to the film regarding feminity would be post-structural and specifically considering Sigourney Weaver's incredible depiction of the feminine and strong character we have all grown to know and love. Theories abound about how, serving the four-films as they stand, the romance - in a corrupted way - is between Ripley and the Alien. The Alien is dominant, dangerous and representing, in Giger's designs, the phallus and the man. Whilst Ripley, has clear feminine traits in her responsibilities in looking after Jonesy (a maternal "expectation"?) and her supportive and secondary role on the ship. Dallas is the Captain of the ship and, even when Dallas is off-ship and she is in the most senior-position, it is Ash who still supercedes her in opening the door despite her instructions to keep Kane quarantined. The irony, is in how Ripley defeats the Alien and how all the men lose their lives in the film - a comment perhaps on how this sexism is a destrauctive attitude in society?

Then again, it is worth noting the generic-twist that Alien adheres to. Quite definitively, the themes of aliens and spaceships would almost exclusively dictate the genre to remain Sci-Fi in it's nature - but I would even argue that the film adheres to the generic codes and conventions of a horror film. John Carpenter's Halloween uses shadows and crampt spaces effectively to hide the killer - and in the same way as Jamie Lee Curtis becomes the sole female figure to survive, Sigourney Weaver equally survives the 'killings' onboard the Nostromo. Add to this how both films end with the final 'scare', following a reveal of female nudity. Again, the true credit for the themes and stories written by Dan O'Bannon and John Carpenter is unclear. 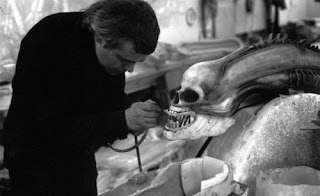 You could explore this film further, and this is a very brief way of highlighting the many facets to the masterpiece Ridley Scott created. Some other huge points could be raised - the war-like hand-held footage as Ripley runs through the corridors with Blitz-like sounding alarms and the controverisal rape-sequence as we can vividly see the Alien's tail between Lambert's legs before the most horrific scream is heard by Ripley. So much more could be discussed, analysed and researched ...

The film has gone on to influence so many more films too - off the top of my head, Sunshine and Moon clearly owes much of their spaceship designs to Alien. Sunshine specifically has a character named Pinbacker - maybe a nod in the direction of John Carpenter and Dan O'Bannon's Dark Star, whereby O'Bannons role was a character named Pinback? In terms of the alien itself, the 1980's provided a wealth of films which imitated the organic and horrific look of the creature - notably Galaxy of Terror and Creature. I am sure that Man I Love Films very-own Jason Soto is well aware of the influx of Alien-inspired films in the early 1980's.

As viewers, we know that no life is expendable - especially Jonesy the Cat. We also know how corrupt businesses can be in the modern-world. Alien remains a work of art that can be deconstructured and reconstructured in a number of ways to bring out different results. Artists of the world look in awe at the visual feast on the abandoned spacecraft holding a space-jockey. Story-tellers plunder the depths that discuss profound, global issues such as capitalism and gender within an exciting horror story. Film viewers and film fans simply watch and rewatch the film that spawned a franchise that we hope can always be explored further - much like space itself. I await with baited breath for Prometheus...

NB - Back in 2003, I was inspired by Alien myself by starring and joint-directing a little feature...

Blogged by simoncolumb Written at 23:00