"It will cost you sweat and tears, and perhaps... a little blood"
Introduction

My close friend Tom of Film Nitrate has a huge interest in silent films. I have never really got 'into' them - and I could probably count on one hand how many I have watched, though I do have every intention to know my Fritz Lang from my Robert Wiene. This shall hopefully put me in a strong position to plough through those Hitchcock silents (they have sat on my shelf for far too long) and get me hyped towards watching the remastered Metropolis ... though, I must say, should I have watched the incomplete one prior to watching the recently found-footage-version? Whatever the case, Tom put me in a privileged position when he bought two copies of Muranu's Nosferatu and sent me his spare copy. And I watched it. A Classic Story Remixed
As I understand, at the time, Nosferatu was created to play out the story of Dracula without mentioning the name 'Dracula'. The set-up is this - the character Hutter is trying to sell his house to a Transylvanian Lord, but he has to visit the Lord far far away. Even before he leaves, we see sequences of werewolves and horses juxtaposed with Hutter getting ready to sleep before travelling. I have heard a theory that, before sound came along, silent filmmaking was coming to a point whereby it managed to become a perfect art form - having established a wide range of styles and effects within the restraints of silent and black/white filmmaking. Styles and effects had become accepted as processes for filmmakers - and then, five years after Nosferatu, sound comes along and changes the goal posts, demanding correlation between what was on the screen and what was heard. At the time, there is no indiaction that the filmmakers were aware of what was around the corner, but it is clear that this film came at the peak of silent filmmaking. The cross-cutting from the horror of the animals outside and Hutter, unaware, was one effect that was 'cutting edge' at the time ... and an effect that, when sound was to come along, filmmakers would have difficultly with - trying hard to compose sound that correlates with these various types of effects.
Fascinating Filmmaking

The range of effects include speeding-up footage to show pace and action, the use of inverted colours (or tones as it is black and white) and the unforgettable sequence as the shadow of Nosferatu moves slowly over the body of Hutter as he sleeps (which I found again, in homage, in Disney's Dumbo!). All these styles, its strange to imagine, were new and rarely seen at this time. It must have been fascinating enough to see live-action on the screen - but the use of a double-negative to create the 'ghost' of Nosferatu must have been exceptionally unnerving at a time whereby the process itself to merely capture something on screen was innovative.
Subtext, Influences and Expressionism 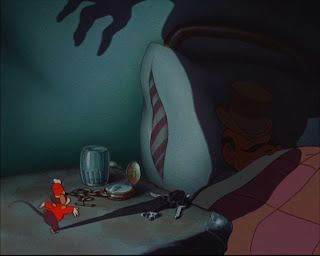 But this is not merely the telling of a story people already know. Murnau manages to sneak in multiple cross-references as the film plays out. We see multiple cut-aways to carnivarous plants (venus fly-traps) and spiders to constantly continue the theme of blood and natures-inevitable-consequence. The idea that these spiders and plants, much like Nosferatu, feast on others to remain alive creates an unnerving atmosphere that forces you to shuffle in your chair - maybe something small is eating at you while you watch the film?

My favourite film of last year, Shutter Island, included a sequence whereby Teddy Daniels (DiCaprio) began to see the overflow of rats on the side of the mountain. The very idea of rats creates fear - the germs and disease they spread, the huge amount that exist without us knowing, the constant growth and breeding of these animals and the practical problems. The list goes on - and it is no suprise to see that this analogy is brought up in Nosferatu. A subplot emerges in the second act whereby rats appear and the fear of a plague threatens the towns people - the very idea of evil slowly creeping into society alongside Lord Nosferatu gaining access to the towns people himself as he has smuggled himself to the town by boat.

A Collage of Creativity

Nosferatu is defeated by Ellen giving him her blood - as foretold by book. The idea of accepting the inevitable has only recently been a theme in cinema via Harry Potter and the Deathly Hallows: Part 2 whereby to defeat Voldermort, Potter has to accept the inevitable and give him what he wants. I do not assume that Harry Potter has been directly influenced by Nosferatu, but there is some exceptionally clear similarities between Lord Voldermort and Lord Nosferatu - and this finale seems quite similar too. You can be the judge of the amount of influence Murnau's Nosferatu has had on Mike Newell (as Voldermort is first seen in Harry Potter and the Goblet of Fire) and David Yates direction of the franchise.

But this film, though highly influential through the expressionist movement - released alongside the highly expressionist Cabinet of Dr Caligari also creates a collage of documents - books, letters, diary - to express the films message. Max Schreck portrays Nosferatu's by hsowing a hunched posture with long, sharp and thin hands with limited make-up accentuating the shadow andgaunt face he shows. This acting alone is rooted in the expressive movement of the time.

As I previously mentioned, though sound was a little way off, the live accompaniments would often include bells and clock-ticking to work alongside what was on screen. It is strange to think that following Nosferatu and the inclusion of sound in cinema, it forced filmmakers to take a few steps back and re-learn the skills of filmmaking. I know, when I watched this, with all the special effects and interesting story-telling techniques it used, it seemed that the filmmakers were at the top of the mountain. Who would've known that bigger mountains stood alongside - filmmakers would struggle for a few years to know how sound would work alongside such special effects. In the first instance, when sound arrived, the sound was recorded at the exact time the sequences were filmed - so these cross-cutting tehcniques and visual subtexts and themes, which Muranau managed to capture so effectively in Nosferatu, became much more challenging to include in 'talkie' films.

Blogged by simoncolumb Written at 14:51