"I had a crush on you - ridiculous, I know"
Introduction
I rarely write a review on a new film. My feeling is that there are so many reviews of the film, my small coverage won't exactly make headlines. But, as I read in The Guardian, it had everything going for it. The writer of the novel wrote the screenplay, the director directed one of the most successful romantic dramas of recent years in An Education and Anne Hathaway with JIm Sturgess gives the impression that they wanted to get real actors. Not actors like Daniel Day-Lewis or Judi Dench, but up and coming actors who take pride in their craft. Sturgess who has worked with Peter Weir and Julie Taymor whilst Hathaway has appeared in Oscar-Nominee Brokeback Mountain and the critically acclaimed Rachel Getting Married. Hardly a recipe for disaster ...
One Day. Twenty Years.
The tagline from the book. I have no problems is negating the postive aspects of a book for the sake of a concise story on a cinema screen. Let's put things in perspective - I can see the lack of time possible to squeeze in Dex's relationship with the girl in the shop at the end, I can see that Emma's affair with the principal at her school simply was unneccessary and would have been out of place - whilst another family member for Dexter would have just crowded the house when he visited. But the set-up of one-day, the same day in July 15th, every year, for twenty years for a film, simply doesn't work. It is too much.
Everytime the date appears to clarify where we are - and why we are there - we have to take a deep breath and get ready to input new information to fill in the gaps of the 364 days which we have missed. Emma Morley (Hathaway) and Dexter Mayhew (Jim Sturgess) meet, more or less, on the first day as the two graduate and then, a year later, she moves into London. She seems to have big ambitions which, like many twentysomethings, are difficult to reach - whilst he has very little ambition but seems to coast into cool jobs and elite groups - but is self-destructive in the process as he places no value to these things.
A Lack of Class
The one thing, which I am glad they carried from the novel, was the abundandtly clear separation in class. In 'one' of the days, Dex visits Emma as she works in a depressing pseudo-Mexican restaurant. Its dirty and cheap - and it doesn't take a genius to see that Emma does not want to be there. Dex seems to be oblivious to the neccessity of the job - it pays the bills and supports her residence in London. I'm paraphrasing, but he notes how she should just "take a bottle of tequila and walk straight out the door and never look back". It is strange to think how dreams, ambition - and consequently desire, passion and lust for life can be so wholly affected by social circumstances. In the novel, Dex at this moment had returned from travelling around India whilst Emma had been proud enough that she got to London. It seems the fantasy of London may only be reality for the privedged few who through circumstance find themselves amongst the centre of it - otherwise you are doomed to see the dream from the outside. Perhaps.
The flip side to this is the lack of value Dexter see's in these opportunities. Emma wants to write her book - that is her dream. Like Julie Driscoll, the fictional character she creates, she is 'against the world' and she works hard to achieve her dream. Dexter seems to be against very little - maybe he is against his arrogance and self-satisfaction. It is only when he goes through the harsh realities and challenges of life - death, fatherhood, husband - does he really value relationships. The pride Dexter seems to take in merely owning a cafe shows how much his attitude to life has changed by the end. 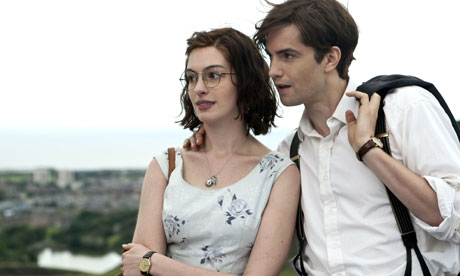 The Last Act
I will spoil the end of the film/novel now - so skip this paragraph if you are keen to watch the film. The beauty of the story is how, after the tragic moment in 2006, the film - and book - continue. Life goes on. 2006 to 2007. 2007 to 2008. Children grow up, family members stand by you. People walk in and out of your life (the role of Ian played by Rafe Spall was perfectly cast. On the one level tragically sad but believable as a nice guy). You have to plough on and celebrate the life you have had - despite the trauma's and difficulties.
Marks for Improvement
The difficulty is clarifying how it could've been better. Jim Sturgess had an exceptionally strong performance - as soon as the camera panned down to his 'Largin It!' programme I thought maybe he was wrong for the role, but his false-cockney accent rang true. Hissuddent frustration and then acceptance of his Mother asking for help - frustrated he has to help, but then realising it is his duty as a son. In the book, he was a charlatan - a chancer who abused his friendship with Emma. His fall from grace is real and we are sad for him - despite his arrogance of youth. Hathaway did seem to struggle - her accent often seem misplaced, almost Scottish, but not-really. Ironically, there is very little background revealed about her character - her family, where she is from, etc. I think the novel mentioned an accent of some sort, but it was not exactly the centre-point of the book. I reckon that she could've just soften her own accent and left it at that -  she need not have watched Emmerdale. Instead she sits alongside Russell Crowe or Robin Hood and Tom Cruise in Far and Away.
I think a complete overhaul of the structure - maybe even choose more 'visual' days. I think, if it wasn't 'July 15th' I wouldn't of cared. It could just say the year and that would surely give them more a scope.Its a tough nut to crack at any rate.

Blogged by simoncolumb Written at 00:45