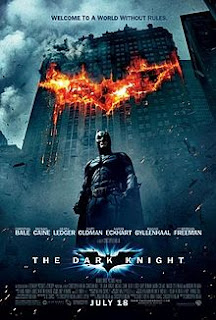 You know... You know what I've noticed? Nobody panics when things go "according to plan."

As a sequel to Batman Begins, Nolan completely changes the dynamic without adjusting it too dramatically. Indeed, Gyllenhaal is much playful in the role of Rachel Dawes whilst it seems the Wayne Industries headquarters is in a different building all together - did they build a skyscraper in a shorter-space of time than Wayne Manor? Maybe it was merely a different building in Gotham. At any rate, the status of Wayne Manor - incomplete - gives the impression that Nolan himself knew that this film would go off on a little tangent. As noted in the analysis of Batman Begins, I believe that the first film criticises Capitalism and, though The Dark Knight does not tackle it directly, it does highlight a specific challenge to the Western world. Those who are motivated by something more destructive than money...

Batman Begins plays off the conflict between two competing ideologies. The right-wing attitude of Ra's Al Ghul (Liam Neeson) against the left-wing approach from Thomas Wayne. In The Dark Knight, the conflict between Harvey Dent (Aaron Eckhart) and Bruce Wayne (Christian Bale) is central to the film - but early-on, it is clear that Bruce and Harvey want to join forces, despite their differences, for the good of Gotham. 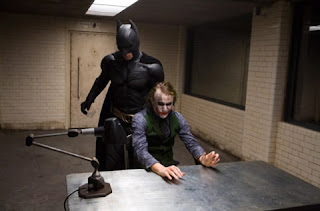 Furthermore, the theme of 'Fear' - an integral issue in Batman Begins - is clearly downgraded as the reintroduction of Batman portrays him easily defeating the arch-enemy of the previous film, Scarecrow (Cillian Murphy) with ease, even making a glib remark as he escapes. He doesn't fear Scarecrow, he doesn't fear dogs and he doesn't worry about much. The obvious problems of the city of Gotham are now fixed - Gotham is not afraid anymore. Criminals have conversations indoors - indeed, criminals don't operate at night if they see the 'Bat' symbol in the sky. But as 9/11 showed the world, alongside our inability in the West to truly tackle the deep-rooted issues in Afghanistan, The Dark Knight exposes how there are much-more complicated issues in the world. Some villains don't fear anything. Bruce Wayne even paraphrases Ra's Al Ghul's right-wing approach to criminal-behaviour - "Criminals aren't complicated, Alfred". It doesn't take long before Alfred recalls a story from his military days and reminds him that "some men just want to watch the world burn".

This "better class of criminal" is portrayed in The Joker (Heath Ledger). An iconic role that has no history or clear motivation - "like a dog chasing cars". He is evil personified. One thing The Joker mocks is Western arrogance and pride - especially the pride we have in money. You only have to see the arrogance of Dent as he dodges a bullet of Maroni's (Eric Roberts) goons - instead of seeing the luck of the situation, he turns to Maroni: "If you want to kill a public servant, Mr. Maroni, I recommend you buy American".

This affluence and arrogance is something The Joker see's no value in. As further support to this theme, the two polar-opposite criminals are portrayed in The Joker on the one side - and Mr Lau (Chin Han) on the other. In a scene when The Joker infiltrates Gambol's (Michael Jai White) gang, he uses pseudo-business terms such as "aggressive expansion" and then, in the next scene, Lucious Fox (Morgan Freeman) and Bruce Wayne visit Lau under false pretences and, they themselves, mock his business as the visit was unneccessary and embarresses Lau. The parrallel between Joker and Batman is clear enough. Batman is chasing both villains - Lau is rich, affluent and easy to catch as he is motivated by money. The Joker is not as easy to catch.

Like 'Fear' in Batman Begins, 'Trust' is the unique theme in The Dark Knight. As examples - Dent believes Gordon's team is corrupt and has difficulty understanding how he can trust such a team; Dent has 'a leak' in his own office; Police find it difficult to trust Batman; Criminals are forced into trusting The Joker - despite their anger towards him. And when it comes down to it, Harvey Dent trusts in Batman in the final act as, after he claims he is the Batman - when asked why, he said that he "trusted Batman would do the right thing".

Our trust, especially in the last few years, has been in the government and banking corporations that dictate the financially-motivated society we live within. How interesting how this trust was without merit. By the same token, our trust gave these positions power and (inevitably?) too much power corrupts you - hence the dilemma Lucious Fox has when faced with the Sonar System Bruce Wayne creates to track The Joker. And so we return to the social-issues of the first film ... 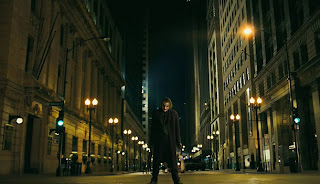 The social inequality tackled in Batman Begins, is not as strong in The Dark Knight initially. Harvey Dent comments briefly on Wayne's Manor, noting how it is "outside city limits", to which Wayne retorts "I was raised here". The further difference between Dent and Wayne is their approach to society - and how Dent's DA position establishes him out at the forefront of crime in Gotham whilst Wayne, a billionnaire who 'contributes' to the economy clearly doesn't understand the social injustices prevalent in Gotham. We know otherwise, but this is clearly a conflict between the two roles. Batman is hidden, whilst Dent is out there in the public eye - and putting his life on the line.

But the final act, suddenly ties these threads of trust, money and inequality into full-focus:

You know... You know what I've noticed? Nobody panics when things go "according to plan." Even if the plan is horrifying! If, tomorrow, I tell the press that, like, a gang banger will get shot, or a truckload of soldiers will be blown up, nobody panics, because it's all "part of the plan". But when I say that one little old mayor will die, well then everyone loses their minds!

The 'insanity' is change. Is creating change. The "plan" Joker speaks of is how the injustices fit with what an unequal society wants. The reason why Dent is easily turned to the dark side, is because of how is opinion and attitude towards the world changes. Two-Face reacts not due to money - but due to anger at the injustices that have now, as he physically changed, has affected his future and livelihood. He is reacting to what he believes is 'right'. Rachel is killed because of what he believes is an unfair society. A society built on money and the neccessity of financial gain - a capitalist society - will inevitably fail as some people are content without money. And somebody who is not motivated by money - and place no value in a capitalist economy - are not a part of the Western 'plan' for the future. Even the opening heists show how banks are corrupt - The Joker attacks mob-banks. 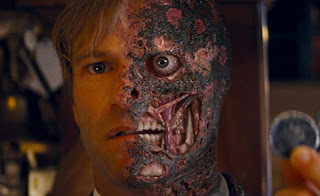 But in the final third, we then see this rebellious attitude in motion - a hospital or an innocent man trying to make a point. Nothing to do with money - just people motivated by their love for their families. With money out of the equation - people will commit any number of crimes. Then the two boats - prisoners on one, innocent civilians on the other - have their own conflict, without factoring money, simply by thinking about themselves and what they, selfishly want. Personally, I always feel like the outcome - as no-one decides to flick the switch - is a bit of a cop-out. But obviously, if either boat exploded, then it would prove The Jokers point and that would be a very pessimistic ending.

The Right Thing To Do

Instead the film ends by determining Batmans role in society. He needs to take responsibility for the crimes Harvey Dent/Two-Face has committed. He needs to set himself apart from 'the plan', as his ethics and purpose does not fit within it. He cannot be a semi-accepted law-enforcer, but he is neither a mad-man, with a belief system that will damage the society he lives within. But he doesn't have to be either of these things either. He can be whatever he wants to be. He is not a person or one-man-with-a-plan. He is an idea, as we recall the teachings from Ra's Al Ghul, and an idea that may attack the ills of society - but purely, honestly, without expecting acceptance or thanks. The film regularly visits the theme of capital punishment - and whether Batman can kill someone. You could argue that if he ploughed through The Joker in his Bat-bike, then that would've been for the best. But he didn't - and this conflict is resolved as he is now seen as capable of killing - through the sacrifice of Harvey Dent. As viewers, we know he won't kill to save Gotham - but we also know that this compassion, recalling Batman Begins, is his weakness. Well not anymore -

This is a different position to the start of The Dark Knight. Batman is now truly feared - and Gotham, though forever against Batman, will have their faith restored in justice and the powers-that-be. Power that is rightfully the states - and not power of a shadowy figure in the night. As we wait with anticipation for The Dark Knight Rises we can be sure of one thing - Bane is not a shadowy figure in the night. And unlike The Joker, Scarecrow and Ra's Al Ghul, the chant implies that he has power and leads others into battle...

On a sidenote, amongst the many things Chris Nolan wrote in his "Farewell to Batman" letter, he stated how - regarding The Dark Knight - he could "burn... up the villain’s blood money to show a complete disregard for conventional motivation". This links in with my own analysis above.

Blogged by simoncolumb Written at 23:01